World War I (WWI or WW1), also known as the First World War, was a global war centred in Europe that began on 28 July 1914 and lasted until 11 November 1918. From the time of its occurrence until the approach of World War II in 1939, it was called simply the World War or the Great War, and thereafter the First World War or World War I. In America it was initially called the European War. More than 9 million combatants were killed: a scale of death impacted by industrial advancements, geographic stalemate and reliance on human wave attacks. It was the fifth-deadliest conflict in world history, paving the way for major political changes, including revolutions in many of the nations involved.

The war drew in all the world’s economic great powers, which were assembled in two opposing alliances: theAllies (based on the Triple Entente of the United Kingdom, France and the Russian Empire) and the Central Powersof Germany and Austria-Hungary. Although Italy had also been a member of the Triple Alliance alongside Germany and Austria-Hungary, it did not join the Central Powers, as Austria-Hungary had taken the offensive against the terms of the alliance. These alliances were both reorganised and expanded as more nations entered the war: Italy,Japan and the United States joined the Allies, and the Ottoman Empire and Bulgaria the Central Powers. Ultimately, more than 70 million military personnel, including 60 million Europeans, were mobilised in one of the largest wars in history.

Although a resurgence of imperialism was an underlying cause, the immediate trigger for war was the 28 June 1914assassination of Archduke Franz Ferdinand of Austria, heir to the throne of Austria-Hungary, by Yugoslav nationalist Gavrilo Princip in Sarajevo. This set off a diplomatic crisis when Austria-Hungary delivered an ultimatum to the Kingdom of Serbia, and international alliances formed over the previous decades were invoked. Within weeks, the major powers were at war and the conflict soon spread around the world.

On 28 July, the Austro-Hungarians fired the first shots in preparation for the invasion of Serbia. As Russia mobilised, Germany invaded neutral Belgium and Luxembourg before moving towards France, leading Britain to declare war on Germany. After the German march on Paris was brought to a halt, what became known as the Western Front settled into a battle of attrition, with a trench line that would change little until 1917. Meanwhile, on the Eastern Front, the Russian army was successful against the Austro-Hungarians, but was stopped in its invasion of East Prussia by the Germans. In November 1914, the Ottoman Empire joined the war, opening fronts in the Caucasus, Mesopotamia and the Sinai. Italy and Bulgaria went to war in 1915 and Romania in 1916.

The war approached a resolution after the Russian Tsar’s government collapsed in March 1917 and a subsequent revolution in November brought the Russians to terms with the Central Powers. After a 1918 German offensive along the western front, the Allies drove back the Germans in a series of successful offensives and American forces began entering the trenches. Germany, which had its own trouble with revolutionaries, agreed to an armistice on 11 November 1918, ending the war in victory for the Allies.

By the end of the war, four major imperial powers—the German, Russian, Austro-Hungarian and Ottoman empires—ceased to exist. The successor states of the former two lost substantial territory, while the latter two were dismantled. The map of Europe was redrawn, with several independent nations restored or created. The League of Nationsformed with the aim of preventing any repetition of such an appalling conflict. This aim failed, with weakened states, renewed European nationalism and the humiliation of Germany contributing to the rise of fascism and the conditions for World War II.

Know : The History of Life on Earth in one Page 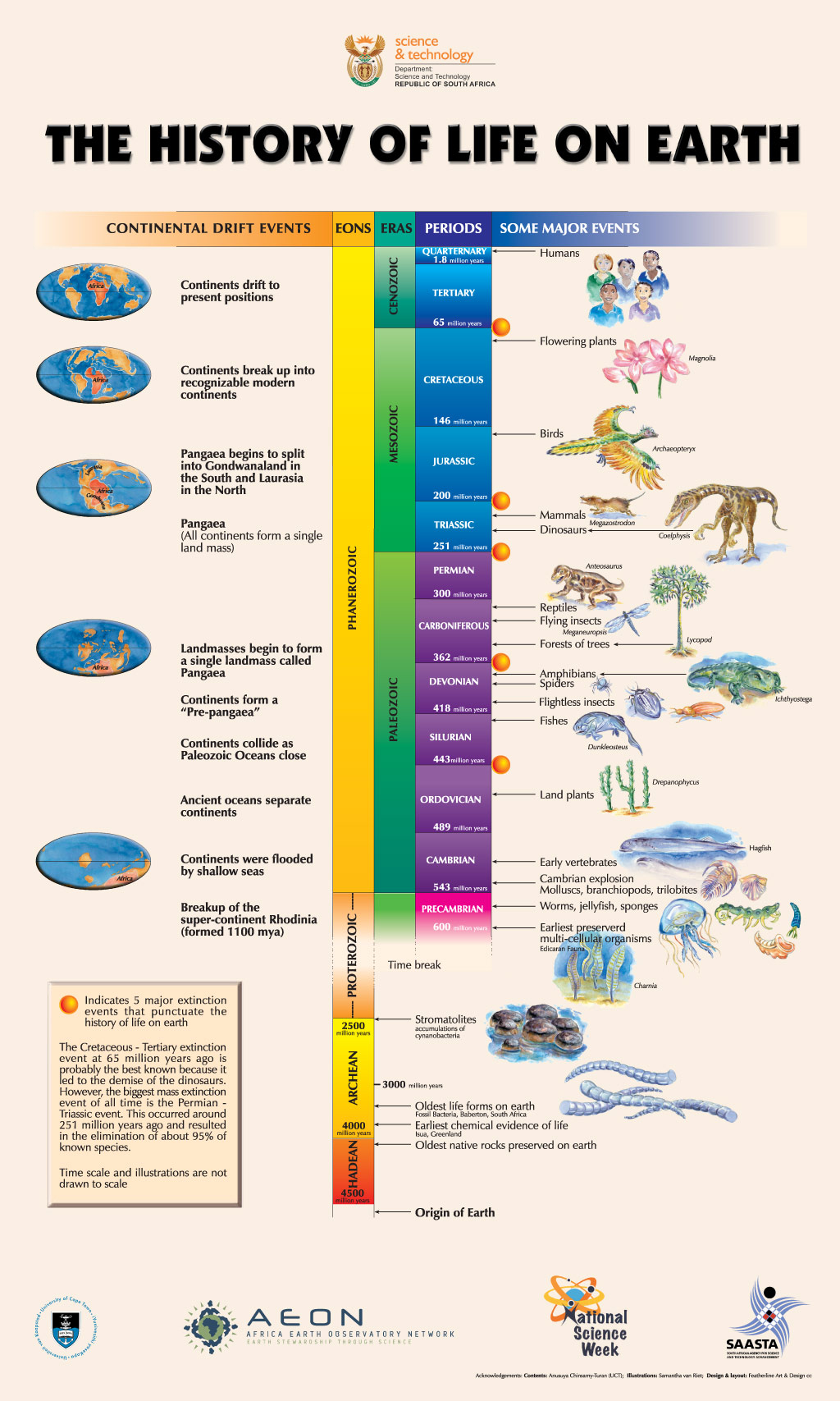