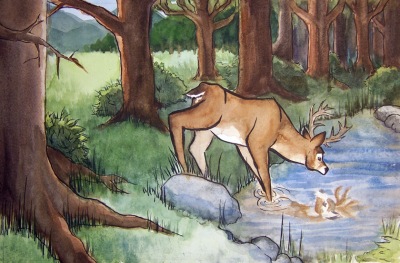 A stag saw his shadow reflected in the water, and greatly admired the size of his horns, but felt angry with himself for having such weak feet.

While he was thus contemplating himself, a Lion appeared at the pool. The Stag betook himself to flight, and kept himself with ease at a safe distance from the Lion, until he entered a wood and became entangled with his horns.

The Lion quickly came up with him and caught him. When too late he thus reproached himself: “Woe is me! How have I deceived myself! These feet which would have saved me I despised, and I gloried in these antlers which have proved my destruction.”

Moral : What is most truly valuable is often underrated. We often self criticize ourselves which is worse than others does the same to us. So We need to feel good about the positives and the best what we have.

3 thoughts on “Story : Never Underrate the Best in You : Aesop’s Fable”