E-volo’s Volocopter is a revolution in aviation Made in Germany. Safer, simpler, and cleaner than normal helicopters, it has a unique way of moving – a groundbreaking innovation.The Volocopter is an environmentally friendly and emission- free private helicopter. Instead of one combustion engine, eighteen electrically driven rotors propel it. 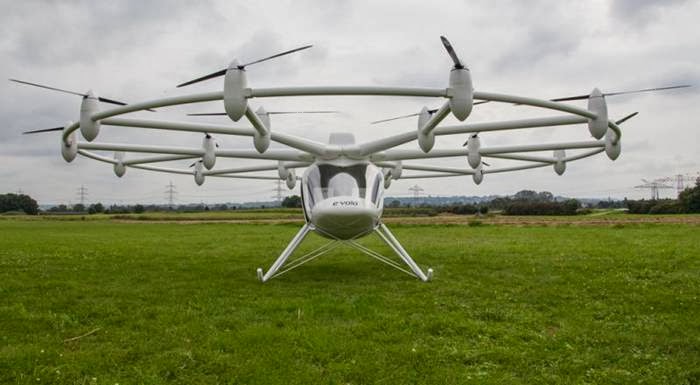 What is a Volocopter?

The Volocopter by e-volo is a completely novel, vertical take-off and landing (VTOL) manned aircraft, which cannot be classified in any known category. The fact that it was conceived of as a purely electrically powered aircraft sets it apart from conventional aircraft.

Through the use of its many propellers, the Volocopter can take off and land vertically like a helicopter. A considerable advantage, apart from the simple construction without complex mechanics, is the redundancy of drives. This enables the safe landing of the volocopter even if some drives fail.

Advantages of the Volocopter

– Very easy to fly by joystick

How Does the Volocopter Work?

The propellers generate the entire ascending force, and by means of a selective change in rotary speed they simultaneously take care of the steering. Furthermore, as opposed to helicopters, no mechanical pitch control of the propellers is necessary whatsoever.

The automatic position control and the directional control take place by means of several independent and mutually monitoring airborne computers which control the rotation speed of each drive separately.

An optional, additional pusher propeller enables an even faster flight.

How Long Can The Volocopter Fly? 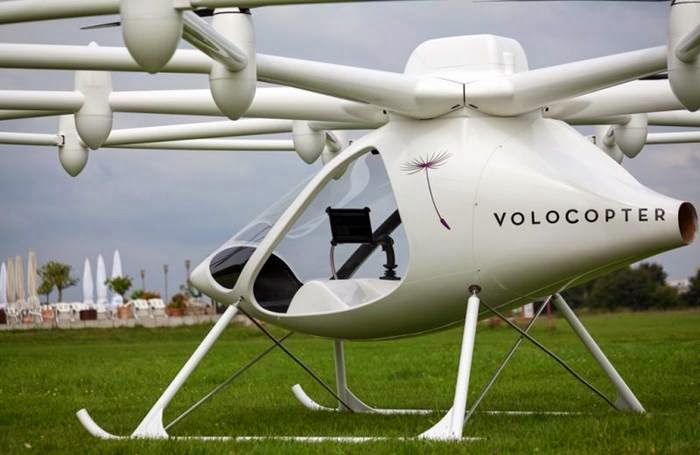 Currently, the limiting factor is the energy capacity of available batteries. However, a considerable advancement in battery technology is conceivable during the next few years, so that a multiplication of the energy capacity will occur within a short period of time. At present a battery flight time of 20 minutes is possible, but in the near future this will be extended to one hour or more.

To enable a flight time of several hours right from the start, our two-seater Volocopter is being developed as a serial hybrid electrical aircraft with a range extender.

A range extender is an additional aggregate in an electrical vehicle which extends the range of the vehicle considerably. The most commonly used range extenders are combustion motors which power a generator that supplies the batteries and electrical engines with electricity. Range extenders run at a constant rotation speed with optimal efficiency.

The integral part of the safety of the volocopter is the redundancy of its components. All safety relevant systems are present in multiple number.

Thereby the volocopter is safe to fly even if several drive units fail. Even if the range extender fails, a safe landing is ensured by additional batteries.

Our volocopters are fitted with a rescue system in the form of a parachute which safely lets the entire aircraft sink to the ground in the case of an emergency. At helicopters in contrast, is the main rotor in the way.

One thought on “Know : Volocopter – the world’s first green helicopter”