Atmospheric circulation is the large-scale movement of air, and the means (together with the smaller ocean circulation) by which thermal energy is distributed on the surface of the Earth. 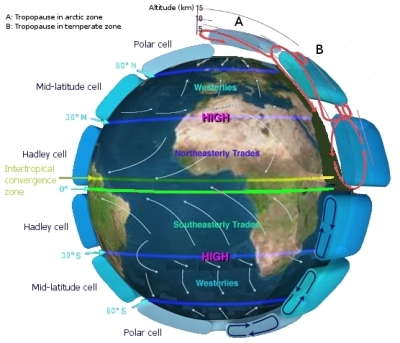 The large-scale structure of the atmospheric circulation varies from year to year, but the basic climatological structure remains fairly constant. Individual weather systems – mid-latitude depressions, or tropical convective cells – occur “randomly”, and it is accepted that weather cannot be predicted beyond a fairly short limit: perhaps a month in theory, or (currently) about ten days in practice (see Chaos theory and Butterfly effect). Nonetheless, as the climate is the average of these systems and patterns – where and when they tend to occur again and again – it is stable over longer periods of time.

As a rule, the “cells” of Earth’s atmosphere shift polewards in warmer climates (e.g. interglacials compared toglacials), but remain largely constant even due to continental drift; they are, fundamentally, a property of the Earth’s size, rotation rate, heating and atmospheric depth, all of which change little. Tectonic uplift can significantly alter major elements of it, however – for example the jet stream -, and plate tectonics shift ocean currents. In the extremely hot climates of the Mesozoic, indications of a third desert belt at the Equator has been found; it was perhaps caused by convection. But even then, the overall latitudinal pattern of Earth’s climate was not much different from the one today.

One thought on “Know : Atmospheric Circulation”