That was not an era of the Internet, even mobile phones were high-tech machines that time. Doordarshan channel and the classic Antenna were the main entertainment in India. I am talking about the 90’s.

One show in particular invaded the hearts of millions that time. Do you remember the TV show “Amul Surabhi”? People who used to watch Doordarshan in the 90’s must recollect the vivid memories of this wonderful programme.

I was a school kid that time look eagerly for the Tamil version of the show, I think Wednesday night 10pm guess I am not wrong. There were no discovery channel or travel & living channel to take us places. This show was like an explorer for many kids and elders that time. Sometimes we curse DD if they miss out the dubbed version and telecast the Hindi one. Sad that time I am not familiar with ABCs of Hindi 🙂 I have vivid memoir of those days. Wanted to know is there anyone who still remembers this wonderful Surabhi? Please comment with your experience. 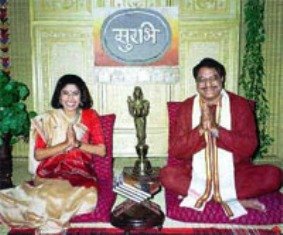 Surabhi (English: Fragrance) was a popular Indian cultural magazine show hosted by Renuka Shahane and Siddharth Kak, which ran from 1993 to 2001. It was telecast on Doordarshan, the Indian state-run television channel, and later moved to Star Plus on Sunday mornings. Surabhi was produced by Kak’s Mumbai based production house Cinema Vision India and had Indian culture as its central theme. The show holds the distinction of being India’s longest-running cultural series and features in the Limca Book of Records for receiving the largest measured audience response ever in the history of Indian television.

The title music of Surabhi was composed by acclaimed Indian composer and classical violinist Dr. L. Subramaniam. Indian cooperative dairy giant Amul sponsored it for a long time, and the show was titled Amul Surabhi. The show had a rating of 51 percent in its initial run in 1993.

One of the reasons of its popularity was the weekly quiz open for viewer participation. At that time mobile phones and Internet were not prevalent in India and viewers would post their responses using the 15 paise postcard of India post. According to the Limca Book of Records the show once received the highest ever documented response in the history of Indian television – over 1.4 million letters in a single week. The Indian postal department was forced to issue a different category of postcards called “Competition Postcards” priced at 2 Rupees each for participating in such contests. Surabhi was dubbed in Indian regional languages like Tamil and got a great response from Indian states where Hindi is not an official language.

During the 1990s, Surabhi had become a benchmark show and is known as “one of the best television shows ever made that reflected the length and breath of the Indian culture“. Subsequently, Kak established the Surabhi Foundation with the assistance of Ford Foundation and started a project on preserving cultural artifacts.