This is one intriguing as well as annoying incident happened in the Delhi Metro, shared by a Facebook user. He in fact was a fellow passenger who witnessed this and shared it with the world. Here it is in his words

” This morning I saw a well-dressed senior citizen, wearing Ray-Ban sun glasses, who boarded the Delhi Metro and went towards a pair of seats reserved for senior citizens. In it where two young boys in their early twenties; one was a well-dressed boy wearing a conspicuous headphone and listening to songs and the other was a boy who looked like a construction worker, wearing rubber slippers and slightly soiled due to some laborious task he had just completed.

The supposed construction worker had a dark complexion and was sleeping when the old man entered the metro. On seeing the old man, the boy with the headphones, immediately vacated his seat while the supposed construction worker, was still sleeping. The old man, woke him up and asked him to get up. Caught unaware, the boy saw the vacant seat next to him (because it had been vacated) and asked the old man to take that seat, but the old man refused and he insisted that the boy gets up so that he can sit with the boy wearing the headphones. 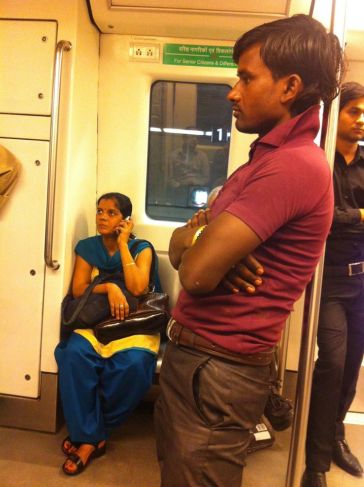 The old man’s aversion to share a seat with someone whom he thought doesn’t fit his stature was so evident and quite nauseating. Unperturbed by the retort and the gaze of the onlookers, the dark complexioned boy firmly said that it doesn’t matter where he is from, he knows what his rights are, and he isn’t scared of the old man’s intimidation.

The old man grudgingly took the seat next to the boy and the boy continued sitting with a calm demeanor. A few stations later, when a lady boarded the train, the young boy vacated the seat for her and the old man looked like a fool. The boy’s response and his confidence levels were so impressive, that I was couldn’t resist but walk up to him to shake hands with him and appreciate him for his behavior. I found out that his name is Arjun and I did not bother to know where he is from.

Some of us still carry the old and disgusting colonial mindsets of discrimination and deprivation even today, many of us are onlookers (like how I was today), and that’s even worse. But it is people like Arjun who assert their rights, break the false walls that many build and many more like us allow them to be built. But if individuals do not assert themselves and if the society doesn’t actively support people asserting their just rights, how will India as a nation assert itself?

That’s why I believe that Arjun is an everyday hero.”