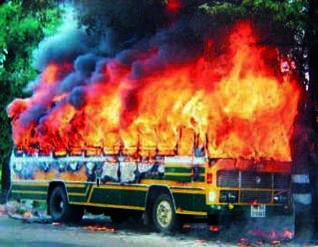 Wonder why some stupid people burn public properties and kill innocent people in the name of what so ever the crap they call it? Especially in the name of Politics! Like in India…

It’s very simple. There are (ok! almost) no politicians here in the politics for the people, so as their party and their supporters. They are in politics for their own selfish motives. This is the bitter truth. Nobody can change them. Only individuals can be the change what he/she wants. Unfortunately, our society always runs on a consensus, without knowing the impacts in the future, without seeing the right or wrong. Just selfishness drives us. We follow the majority, even if they are walking towards a pile of crap.

Many of you aware of the arrest of a Cheif Minister (Tamilnadu, India) following that protests and riots in Tamilnadu. Without even thinking with common sense.

1. She was a CM, not an ordinary person. If justice can treat her equal, be proud about India, at least we have such a judiciary system here.

2. We are no one to justify the judgement. It is up to the then CM, the Judge and advocates to prove the guilt or innocence in their side.

4. Oppositions parties 🙂 As expected the hypocrites did their job, with dirt on their own hands.

5. The most importantly missing common sense: If the then CM was innocent, who stopped her from proving her innocence? If it is not possible for a CM to justify! provided the accusations were wrong, as claimed by their supporters! Then imagine common people’s situation, anyone can frame any case on anyone at will, if they have money power.

If we people find profit in making patriotic movies against bad politicians, corruptions, we will make such movies, watch and celebrate 100 days. Also forget it next day. Who cares in Real life. Isn’t it? Our heroes protested for the release of the arrested. Why didn’t they appeal in court, filed a case against the judgement and everyone signed a petition? We have seen heroes who inspired us in such movies became victims of the situation in real life! If they didn’t join the protest supporting a corruption case, their films will face tough situations ahead. Maybe that’s why they had participated. So as hundreds of street side vendors and common people who closed their businesses, just to prevent some moron from throwing stones or setting fire to the life-source of their family. There was no sentiment at all, but just an enforced situation.

This is not just about this incidence, almost all the political parties in India would trigger the same reaction if they face any actions like this. So the points here are just for quoting an example. The picture is bigger.

We people all knew the true colors of politicians who accumulate wealth illegally. Some get caught, many are not. Even there are bad people among us who do the same, may be in a smaller scale, when compared to politicians. There are also good people who still believe in honesty and justice. But here, there is no use of raising voice or standing against the Politicians. Because the system of this selfish society supports them. They are the majority. They want the crumbs that fall from the politicians leftovers. So good people just need to stay aside and watch their games.

Evil will expose other evils and destroy one another, if not today some other day. But it will happen.

“Instead of putting a Band Aid on your cut finger, why not just amputate at the elbow? See, I’m a problem solver. I should go into politics.”
― Jarod Kintz,

Note: This is unbiased, written on social interest and for educational purposes only