Fruit waxing is the process of covering fruits (and in some cases vegetables) with the artificial waxing material. Natural wax is removed first, usually by washing. Waxing materials may be either natural or petroleum-based.

The primary reasons for waxing are to prevent water loss (making up for the removal in washings of the natural waxes in fruits that have them, particularly citrus, but also, for example, apples) and thus retard shrinkage and spoilage, and to improve appearance. Dyes may be added to further enhance appearance, and sometimes fungicides.

How to be Careful in consuming Artificially Waxed Apples? 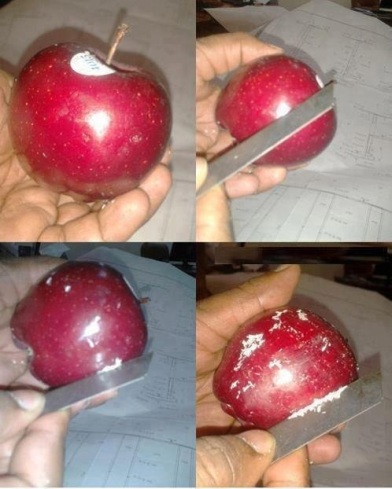 It is a fact that apple fruits are coated with wax, but the wax that is generally used is edible one and is safe to consume. However, some unscrupulous producers can coat apples with petroleum-based waxes that are harmful for human health.

Apples have natural wax coating on their surface, you can observe this when you pluck an apple from a tree and rub it with your hands. The whitish kind of powder that sticks to your palms is the natural wax on the surface of apple fruit. Likewise, when you scratch an artificially waxed apple, you will see a thin layer peeling off.

Apples are coated with wax for several reasons, like preservation, reduce loss of water, increase visual freshness and of course, replace the natural wax, because cleaning and processing of apples results in the loss of natural wax coat. This practice is very common, especially in supermarkets. Thin layer of wax is coated on apples, either by dipping, brushing or spraying with edible waxes like Carnauba or Shellac that are completely safe to consume and are not harmful. This edible wax is not digested, but is passed out through the digestive system.

On the other hand, some unscrupulous producers use the harmful petroleum-based waxes for coating of apples. If an apple looks very glossy and shiny, it is to be suspected. To avoid harmful wax coat, it is advisable to buy apples from markets and places where apples are grown. The chances that the farmers have not waxed apples will be good here. It is also a better idea to buy the dull apples that are fresh, without any kind of artificial coating.

More importantly, it is always a good practice to clean apples with lukewarm water thoroughly before eating. Also, you may use a paper towel with some vinegar (acetic acid) to wipe the apple before washing. Another obvious way to avoid harmful wax of apple fruits is to remove the entire peel, but you might lose on certain vitamins and also the crispiness of the peel. You can share and spread this health awareness about waxed apples. – (Courtesy: HoaxorFact.com)

The waxing materials used depend to some extent on regulations in the country of production and/or export; both natural waxes (sugar-cane, carnauba, shellac, resinor) or petroleum-based waxes (usually proprietary formulae) are used. Wax may be applied in a volatile petroleum-based solvent but is now more commonly applied via a water-based emulsion. Blended paraffin waxes applied as an oil or paste are often used on vegetables. Brand names for waxes include Tal-Prolong, Semper-fresh, Frutox, Waxol, Fruit and vegetable kleen and Decco Luter

A glazing agent is a natural or synthetic substance that provides a waxy, homogeneous, coating to prevent water loss and provide other surface protection for the substance.

Natural glazing agents have been found present, most often in plants or insects. In nature, the agents are used to keep the moisture in the specimen, but science has harnessed this characteristic by turning it into a glazing agent that acts as a coating. This glazing agent is made up of a substance that is classified as a wax. A natural wax is chemically defined as an ester with a very long hydrocarbon chain that also includes a long chain alcohol. However, in a wax there have been many different chemical structures that can be included in a definition of a wax, such as: wax esters, sterol esters, ketones, aldehydes, alcohols, hydrocarbons, and sterols.

Science has produced similar glazing agents that mimic their natural counterparts. These components are added in different proportions to achieve the most optimal glazing agent for a product. These products range from things in the cosmetic, automobile and food industry.

1. Preservation- It refers to the glazing agent to be able to protect the product from degrading and water loss. The characteristic can lead to a longer shelf life for a food or the longevity of a car without rusting.

2. Stability- It is important for the glazing agent itself to maintain its integrity if under any pressure or heat.

3. Uniform viscosity- This ensures for a stronger protective coating because it can be applied to the product as a homogeneous layer.

4. Industrial reproduction- This is important because most glazing agents are used on commercial goods and therefore large quantities of glazing agent may be needed.

There are different variations of glazing agents, depending on the product, but they are all designed for the same purpose.

In addition to fruit, some vegetables can usefully be waxed, such as cassava; vegetables commonly waxed include cucumbers, swedes or rutabagas and green tomatoes. A distinction may be made between storage wax, pack-out wax (for immediate sale) and high-shine wax (for optimum attractiveness)