A young Chinese boy who was born with beaming blue eyes has stunned medics with his ability to see in pitch black darkness.

Nong Yousui from Dahua, China has eyes that reflect neon green when a light is shined on them. Doctors have studied Nong’s amazing eyesight since his dad took him to the hospital concerned over his bright blue eyes. “They told me he would grow out of it and that his eyes would stop glowing and turn black like most Chinese people but they never did”, his Dad said.

Nong enjoys playing outside with his schoolmates but experiences discomfort when in bright sunlight, however can see completely clear in pure darkness. 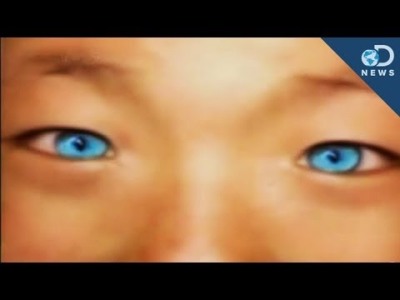 To test his abilities, a Chinese journalist prepared a set of questionnaires which he was able to finish while sitting in a pitch black room. The tests show Nong can read and write perfectly without any light and can see as clearly as most people do during the day.

According to the World Record Academy (the leading international organization which certify world records), Nong has even set the world record for the first human who can see in the dark. In animals, night vision is made possible by the existence of a thin layer of cells, called the tapetum lucidum. And like a Siamese cat, Nong’s sky-blue eyes flash neon green when illuminated by a flashlight.

Nong’s night vision has sparked interest around the world by vision scientists, evolutionary biologists, and genetic engineers. And this is good news for science as we may eventually be able to use genetic technologies to deliberately create such a condition ourselves. A new and growing generation of extraordinary and gifted children are springing up across our planet.

A baby human’s fingerprints are formed after just three months of the pregancy.

A human sneeze creates a blast of air that can be moving more than 100 miles per hour.

All babies are color blind at birth, they see only black and white.

Babies are born with 300 bones, but by adulthood the number is reduced to 206.

By the time it is seventy years old, your human heart will have beat an average two-and-a-half billion times.

By the time they are 60 years old, most humans have lost half of their taste buds.

Every inch of the skin, there are about 32 million bacterias.

Everyone has a unique smell, except for identical twins, who smell the same.

In just 30 minutes, the average person’s body produces enough heat to boil a 1/2 gallon of water.

Nerve impulses to and from the brain travel as fast as 170 miles per hour.

On average, a woman’s body produces about 1/2 a million eggs.

On average, an individual grows over 450 miles of hair in a lifetime.

On average, your kidneys will filter around 1.3 liters of blood every minute.

The acid in your stomach is strong enough to dissolve razorblades.

The average human drinks about 16,000 gallons of water in his or her lifetime.

The brain has approximately 100 billion nerve cells that send and receive information around the body.

The brain only makes up about 2% of the body but uses 20% of the oxygen that enters the bloodstream.

The brain operates on the same amount of power as 10-watt light bulb.

The human body has enough iron in it to make a 3 inches long nail.

The human body is estimated to have 60,000 miles of blood vessels.

The human body is estimated to have 60,000 miles of blood vessels.

The human brain cells can hold between 3 and 1000 Terabytes of information. The National Archives of Britain, containing over 900 years of history, only takes up 70 terabytes.

The largest cell in the human body is the female egg and the smallest is the male sperm.

The lifespan of a human hair is 3 to 7 years on average.

The only part of your body that has no blood supply is the cornea in the eye. It gets its oxygen directly from air.

The strongest muscle in the human body is the tongue.

The tooth is the only part of the human body that can’t repair itself.

There are about one trillion bacteria on each of your feet.

There are nearly 46 miles of nerves in an adult’s body.

To completely regrow a human fingernail or toenail, all the way from base to tip, takes about 6 months.

Women’s hair is about half the diameter of men’s hair.

Your lungs need a lot of breathing room. The total surface area of the lungs is approximately equal to the size of a tennis court.

A gallium Spoon melts when immersed into tea..