PISA 2012 is the programme’s 5th survey. It assessed the competencies of 15-year-olds in reading, mathematics and science (with a focus on mathematics) in 65 countries and economies.  (Note : INDIA is not a participant)

Around 510 000 students between the ages of 15 years 3 months and 16 years 2 months participated in the assessment, representing about 28 million 15-year-olds globally.

The students took a paper-based test that lasted 2 hours. (You can take the test ONLINE HERE. )The tests were a mixture of open-ended and multiple-choice questions that were organized in groups based on a passage setting out a real-life situation. A total of about 390 minutes of test items was covered.  Students took different combinations of different tests. They and their school principals also answered questionnaires to provide information about the students’ backgrounds, schools and learning experiences and about the broader school system and learning environment.

The OECD’s PISA 2012 tested students on maths, reading and science. The main focus was on maths. Math proficiency is a strong predictor of positive outcomes for young adults. It influences their ability to participate in post-secondary education and their expected future earnings.

Shanghai-China, and Singapore were top in maths, with students in Shanghai scoring the equivalent of nearly three years of schooling above most OECD countries. Hong Kong-China, Chinese Taipei, Korea, Macao-China, Japan, Liechtenstein, Switzerland and the Netherlands were also in the group of top-performing countries.

“With high levels of youth unemployment, rising inequality and a pressing need to boost growth in many countries, it’s more urgent than ever that young people learn the skills they need to succeed,” said OECD Secretary-General Angel Gurría during the launch in Washington D.C. “In a global economy, competitiveness and future job prospects will depend on what people can do with what they know. Young people are the future, so every country must do everything it can to improve its education system and the prospects of future generations.”

The survey reveals several features of the best education systems. Top performers, notably in Asia, place great emphasis on selecting and training teachers, encourage them to work together and prioritize investment in teacher quality, not classroom sizes. They also set clear targets and give teachers autonomy in the classroom to achieve them.

Children whose parents have high expectations perform better: they tend to try harder, have more confidence in their own ability and are more motivated to learn.

Of those 64 countries with trend data in maths up to 2012, 25 improved in maths, 25 showed no change and 14 did worse. Brazil, Germany, Israel, Italy, Mexico, Poland, Portugal, Tunisia and Turkey have shown a consistent improvement over this period. Shanghai-China and Singapore improved on their already strong performance in 2009.Italy, Poland and Portugal also increased their share of top performers and reduced their share of low performers. Germany, Mexico and Turkey also managed to improve the performance of their weakest students, many of whom came from socio-economically disadvantaged backgrounds. This shows that countries can simultaneously improve equity and raise performance. You can compare your country with other as well previous year’s performances here. (Click this Link) ; The US Specific data here (Click the Link)

Giving every child the chance to succeed is essential, says the OECD. 23% of students in OECD countries, and 32% overall, failed to master the simplest math problems. Without these basic skills, they are most likely to leave school early and face a difficult future. Some countries have succeeded in helping underperformers: Colombia, Finland, Ireland, Germany, Mexico and Poland have put in place systems to identify and support struggling students and schools early, and have seen the PISA scores of this group increase.

Other key findings include:

Boys perform better than girls in maths. They scored higher in 37 out of the 65 countries and economies, while girls outperform boys in 5 countries. The gender gap is relatively small though; in only six countries is it greater than the equivalent of half a year of formal schooling.

The gap is widest among top students, still wide among the weakest students and about the same for average ones. Girls also feel less motivated to learn maths and have less confidence in their abilities than boys.

Between 2000 and 2012, the gender gap in reading performance – favouring girls – widened in 11 countries and economies. Boys and girls perform similarly in science.

Teacher-student relations improved between 2003 and 2012 in all but one country, according to students’ reports. The disciplinary climate also improved during the period, on average across OECD countries and in 27 individual countries and economies.

A better teacher-student relations are strongly associated with greater student engagement with and at school. 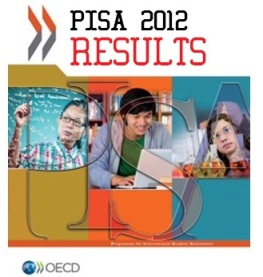 The OECD’s PISA results reveal what is possible in education by showing what students in the highest-performing and most rapidly improving education systems can do. The findings allow policy makers around the world to gauge the knowledge and skills of students in their own countries in comparison with those in other countries, set policy targets against measurable goals achieved by other education systems, and learn from the policies and practices applied elsewhere.

More Detailed Reports can be downloaded from their official website here 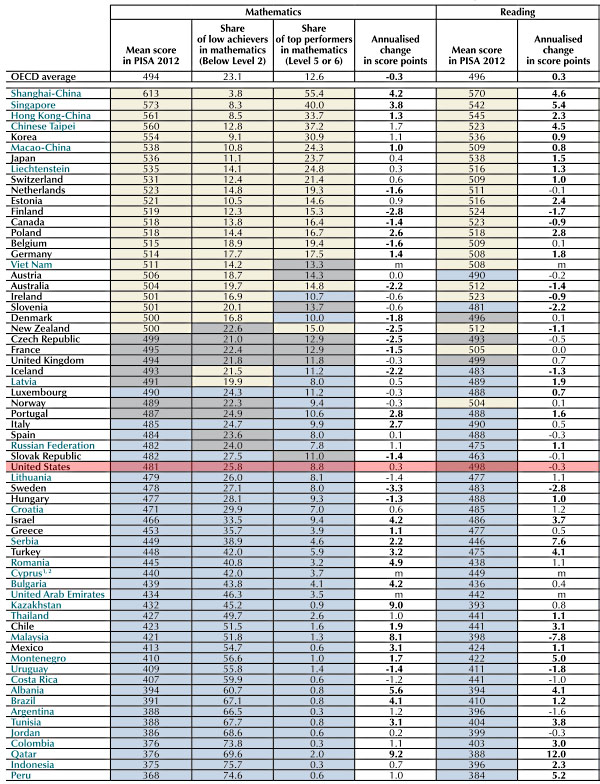