“Yangyang” was presented at the Global Mobile Internet Conference in Bejing with the aim of getting younger people interested in studying robotics.

Dressed in a long red coat, the android can move its head, raise its hands and speak – fooling many into thinking it’s a real woman. 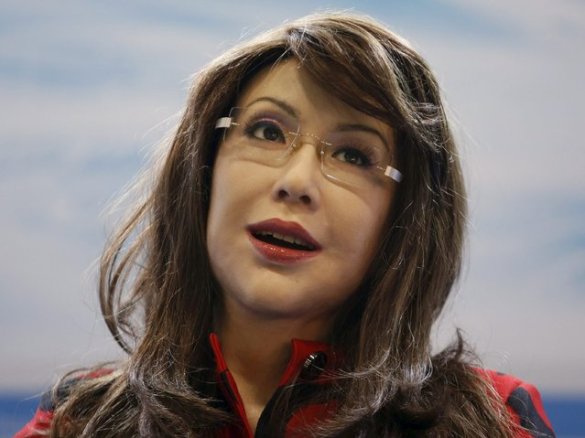 The machine was produced at the Yangyang Intelligent Robot Science Service Centre and gave a demonstration of its range of emotions at the show.

The eerie creation is the latest advancement in robotics that are swiftly becoming all-too-human.

Unfortunately, only a few cars made it to the roads and many of them just remained as much adored cars on Techno-Exhibitions.

Because customization of Cars has many laws associated with it and that varies from country to country. You can read some of the common illegal alterations following this gallery. So when you try customizing your car, always check your state’s law.

In India, you check the following list before you customize.

However, these cars will tempt you at least to go for a ride. 🙂 Which one is your favourite? 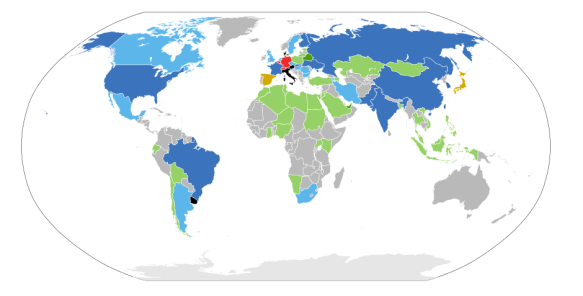 Nuclear power stations operate in 31 countries. Of the thirty countries in which nuclear power plants operate, only France, Belgium, Hungary and Slovakia use them as the primary source of electricity, although many other countries have a significant nuclear power generation capacity. According to the World Nuclear Association, a nuclear power advocacy group, over 45 countries are giving “serious consideration” to introducing a nuclear power capability, with Iran, the United Arab Emirates, Turkey,Vietnam, Belarus, and Jordan at the forefront. China, South Korea and India are pursuing ambitious expansions of their nuclear power capacities

As of June 2011, Germany and Switzerland are phasing-out nuclear power which will be replaced mostly by fossil fuels, and a smaller part renewable energy.

There are so many comparisons going on “MAVEN vs MOM”, without even knowing the PURPOSE, DIMENSIONS, PAYLOADS, TRAJECTORY and RESEARCH POTENTIALS of both the projects. But this is not a competition but a good progression in Science. It is illogical to compare both as a subject of Pride. If we can understand the differences, we can educate the right info about both the Mission to MARS. Here is the complete info…

NASA’s Mars Atmosphere and Volatile EvolutioN (MAVEN) is a space probe designed to study the Martian atmosphere while orbiting Mars.

The two projects are being conducted for very different reasons.

MAVEN is the first spacecraft that will focus primarily on the state of the upper atmosphere, the processes that control it, and the overall atmospheric loss that is currently occurring. Specifically, MAVEN will explore the processes through which the top of the Martian atmosphere can be lost to space. Scientists think that this loss could be important in explaining the changes in the climate of Mars that have occurred over the last four billion years.

MAVEN is larger than MOM. 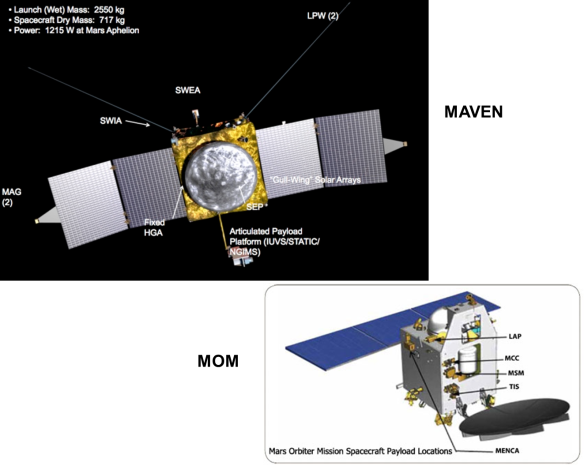 The Atlas 5 rocket to be used to launch MAVEN has the capability to lift about 7,000 kg directly into a Geostationary transfer orbit (GTO). This allows MAVEN (2500 kg) to be injected directly into a Trans-Mars trajectory from launch.

The PSLV to be used for MOM can lift about 1300 kg into a GTO. With the MOM having a mass of 1337 kg, it becomes necessary for a  launch first into earth orbit and then a multi-step transition  through ever increasing earth orbits and finally into a Trans-Mars trajectory.

The two vehicles have very different payloads packages, as befitting their separate objectives.  MOM’s instruments are mainstream, broad spectrum, and intended to give ISRO experience at measuring different types of planetary data ranging from atmospheric to surface morphology.  MAVEN’s instruments are all focused on upper atmosphere and are cutting edge, measuring to greater limits, sensitivity, and accuracy than previous missions. 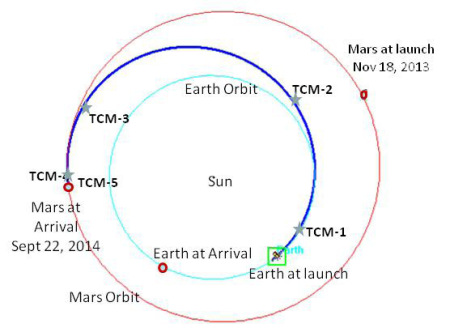 MAVEN is due to launch on an Atlas 5 rocket at 1:28 p.m. EST (1828 GMT) on Monday (Nov. 18) from Florida’s Cape Canaveral Air Force Station. Within one hour of launch, MAVEN will be in a Hohmann Transfer Orbit with periapsis at Earth’s orbit and apoapsis at the distance of the orbit of Mars. MAVEN should reach Mars orbit on 22nd September 2014.

Because of the relatively low payload capability of the PSLV for an interplanetary mission MOM will spend more than four weeks in earth orbit and has to be equipped with radiation shielding to endure the numerous passages through earth’s radiation Belts. MOM has fired its Liquid Motor six times – always when passing perigee to gradually increase the apogee of the orbit to work its way up to departing Earth orbit in a fuel-efficient manner. The sixth (including one correction) firing yesterday placed the spacecraft in a 600 by approx 193,000 kilometer orbit around Earth and sets up the proper perigee passage for the final engine burn that puts the vehicle onto its Trans-Martian Trajectory using s standard Hohmann Transfer Orbit on 30th November/ 1st December. MOM should reach Mars orbit on 24th September 2014 (2 days after MAVEN).

The separation here is again due to their separate objectives.  MOM is primarily intended to provide information to ISRO on how to plan, design, manage, and operate interplanetary missions.  It is an invaluable and essential process that will allow larger scale future missions.  The information will be of great use to engineers and mission planners at ISRO.  Although limited, the Mars information will also no doubt be of interest to researchers.

MAVEN is targeting a science orbit of 150 by 6,200 Kilometers at an inclination of 75 degrees. It will perform measurements from a highly elliptical orbit around Mars over a period of one Earth year, with five “deep dips” at 150 km minimum altitude to sample the upper atmosphere.

Mangalyaan will be much further out and targets an operational orbit of 365 by 80,000 Kilometers with an inclination of 150 degrees and a duration of 76.72 hours from where it will perform its science mission. The MOM mission in Mars orbit is open-ended and is expected to last about 160 days. MOM’s closest approach is 377 km

MAVEN’s data is far more specialized and of interest to smaller groups of researchers, but the project fits under one of NASA’s “Big Questions” – specifically understanding how life developed on Earth.  Studying the atmosphere of Mars should provide insights to researchers interested in the evolution of Earth’s atmosphere.

MAVEN’s science phase features regular communication sessions. The spacecraft points its High Gain Antenna at Earth for high data rate communications twice per week with the exact timing depending on Deep Space Network visibility. Those comm sessions take place on Tuesday and Friday and have a duration of eight hours during which at least five hours of Earth pointing are required to downlink all science data and housekeeping telemetry.

Mangalyaan is equipped with a 2.2-meter diameter High Gain Antenna which is a parabolic X-Band reflector antenna that is used for data downlink and command uplink. Science data and spacecraft telemetry is stored in two 16Gb Solid State Recorders aboard the vehicle for downlink during regular communications sessions. Low and Medium Gain Antennas are used for low-bandwidth communications such as command uplink and systems telemetry downlink.

Both vehicles arrive at Mars the same week (22 Sept 2014 for MAVEN and 24 Sept 2014 for MOM).  MOM is taking longer to get there because of the multiple Earthbound maneuvers in its trajectory.  Those maneuvers are part of the mission test objectives.

“If NASA’s orbiter Maven and ISRO’s Mars Orbiter are successful, they will complement each other in findings and help understand the red planet better. We will coordinate with NASA once both our missions get there. Right now our focus is to get the Orbiter there,” ISRO sources told PTI. Explaining the differences between both missions, they said that unlike the American NASA orbiter, MOM is a “small and modest” attempt by India. – NDTV

Materials science, also commonly known as materials engineering, is an interdisciplinary field applying the properties of matter to various areas of science and engineering. This relatively new scientific field investigates the relationship between the structure of materials at atomic or molecular scales and their macroscopic properties. It incorporates elements of applied physics and chemistry. With significant media attention focused on Nano science and nanotechnology in recent years, materials science is becoming more widely known as a specific field of science and engineering. It is an important part of forensic engineering (Forensic engineering is the investigation of materials, products, structures or components that fail or do not operate or function as intended, causing personal injury or damage to property.) and failure analysis, the latter being the key to understanding, for example, the cause of various aviation accidents. Many of the most pressing scientific problems that are currently faced today are due to the limitations of the materials that are currently available and, as a result, breakthroughs in this field are likely to have a significant impact on the future of technology.