Uzbekistan officially the Republic of Uzbekistan is a landlocked country in Central Asia. Before 1991, it was part of the Soviet Union. Once part of the Persian Samanid and later Timurid empires, the region which today includes the Republic of Uzbekistan was conquered in the early 16th century by nomads who spoke an Eastern Turkic language. This region was subsequently incorporated into the Russian Empire in the 19th century, and in... END_OF_DOCUMENT_TOKEN_TO_BE_REPLACED 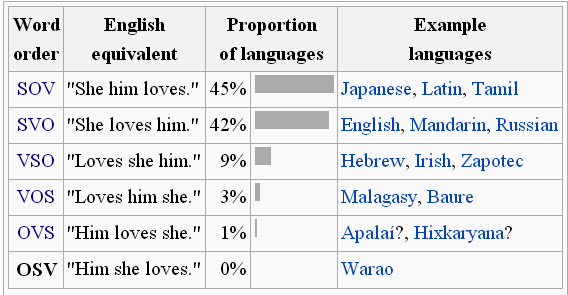 In linguistic typology, subject–verb–object (SVO) is a sentence structure where the subject comes first, the verb second, and the object third.  SOV is the most common type (followed by subject–verb–object; the two types account for more than 75% of natural languages with a preferred order).  Source : Frequency distribution of word order in languages surveyed by... END_OF_DOCUMENT_TOKEN_TO_BE_REPLACED